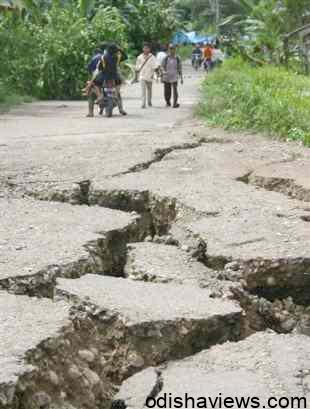 JAGATSINGHPUR Apr 16. An earthquake was felt in Jagatsinghpur coast on Tuesday around 8.30 AM local time in India, several coastal blocks as Balikuda, Erasama, Kujanga and Astaranga block in Puri district felt this minor quake , it was observed almost 20 to 30 seconds.

As per available reports , villages as Naharan, Baramunduli, Bandar , Nendera, Machhagaon under Balikuda block, Goda, Gadaharishpur, Padmapur villages under Erasama block and few regions of Paradeep coast under Kujanga block including few areas of Astaranga block small tremor was observed. As per the people who felt it, it lasted for at least 15 to 30 seconds. No damage and devastation could have occurred, report said a building in Phulabelari village under Balikuda has partially damaged including few cyclone shelters could have received cracks in walls but any fatalities has not been known till now.

Report also added that the tremor lasted for few seconds while people were seen running out of houses , no damage has not been reported, we were feeling our building shocking at 8.20 AM so asked family members coming out from house it lasted about 20 seconds, informed Bijaya Das , ZP member Naharana Panchayat.