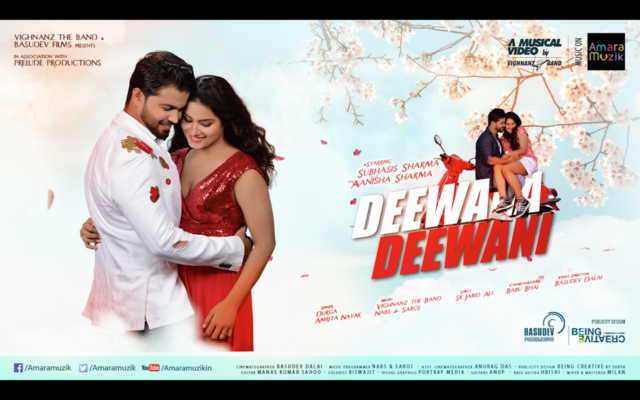 Breaking the current trend, Vighnanz – The band has first released a motion poster on Amara Muzik. The motion poster has been unveiled as the first time for his upcoming music video – Deewana Dewani. Since the celebrity couple Subhashish Sharma and Aneesha Sharma, the odia industry is being put aside in a way.

G. Durga Prasad singer of music video said, “We always want to deliver something new to our audience, and till date no one has exploited the motion poster bit. Poster from our single music video, the couple’s deep love and romance Shows a glimpse. ”

The motion poster is being conceptualized and designed by ‘Creative Sun and Motion of the Poster’ by Pantrey Media.

Surya of ‘Bin Creative’ said, “Poster is based on our concept of love and romance.” We have played with some of the songs, the red scooter is dominated by a couple’s chemistry- Subhashis and Anita have bounced the product. ”

Music by Vighnanz – The Band and Nabs & Saroj