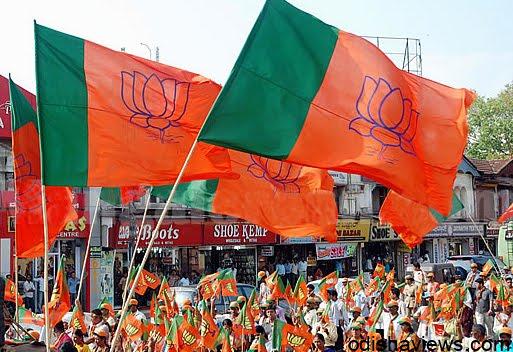 JAGATSINGHPUR – AUG 10. Normal life was Saturday partially disrupted in Jagatsinghpur and its adjoining areas due to a 12 hour Hartal called by BJP to protest the alleged death of Kendrapada rape victim and inaction of the state government and police administration towards women atrocities. In Jagatsinghpur town BJP workers led by district president Upendra Biswal thronged to the streets carrying placards and festoons and shouted slogans against state government, later they converged at Gandhi Chhak here and resorted road blockade as consequence vehicular traffic remained off for three hours, later police rushed to the spot and maintained law and orders. Shops, business establishments, schools and colleges remained open during the Hartal, causing second Saturday is holiday government offices were remained closed so Hartal was no impact over it. Hundreds of passengers were put on standard at bus stand waiting bus to several locations following saffron party supporters staged road blockade, later traffic movements on several routs were resumed after 1 PM.  However reports said that BJP Hartal was observed at all block headquarters including Paradeep port town, police had made elaborate arrangements to prevent any on toward incident, as many as 23 BJP workers from Jagatsinghpur were arrested and later released, police said