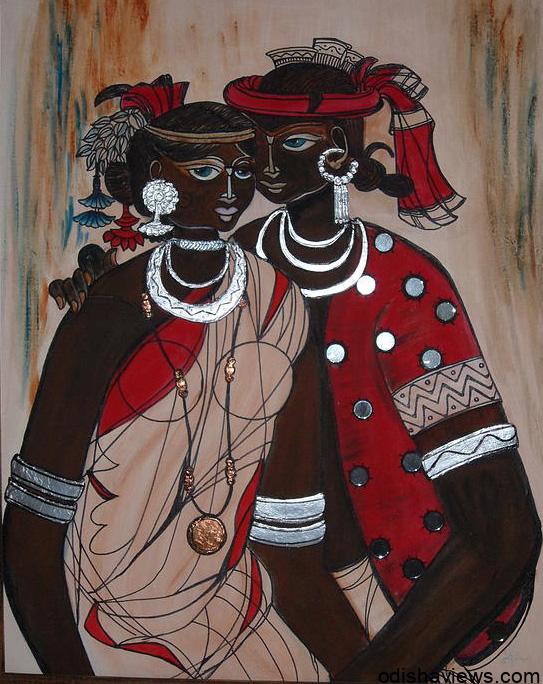 it is the capital of the indain state of odisha, formerly known as odisha.. The city has a history of over 3,000 years starting with the Mahamegha-bahana Chedi dynasty.  It is the largest city in Odisha, and a centre of economic and religious importance in Eastern India after Kolkata It is also the second best city in the east after the city of Kolkata.
With its large number of Hindu temples, which span the entire spectrum of , Bhubaneswar is often referred to as a temple city and together with puri and konark it forms the swarna tribhuja(“Golden Triangle”); one of the most visited destinations in eastern India.
Bhubaneswar riched in economy,civic administration,culture and utility services.

BHUBANEWSAR MAGNIFICIENT TRANSPORT
Bhubaneswar is well connected by air, rail and road to the rest of India. The modern Biju Patnaik airport is being extended to receive wide bodied aircraft, and one may well see international charters landing here soon.so it the easiest way of planning for couples to enjoy the beauty of this kalinganagari. Maximum and efficient transport in land and air. 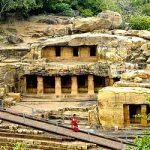 The new Bhubaneswar with its modern buildings and extensive infrastructure perfectly complements its historic surroundings. With facilities to cater to every type of visitor, Bhubaneswar makes an ideal tourist destination. The twin hills of Kumargiri and Kumarigiri known asKhandagiri and Udaygiri contain varieties of rock-cut caves, built mainly for the jain monks around 1st – 2nd century B.C.#The thirteen years lithic record of King Kharavela engraved in Hatigumpha (elephant cave) is a magnificent specimen of Pali records so far found in India. 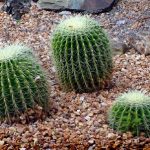 1CACTUS GARDEN: situated close to the ‘Ekamara Kanan’ in Bhubaneswar, the Cactus Garden, with its huge collection of Cactii should not be missed. 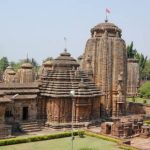 2.LINGARAJ TEMPLE: The great Lingaraja (eleventh century), which soars above the city of Bhubaneswar and dominates the landscape as far as 15 kms away, represents Orissan temple architecture at its most mature and fully developed stage. By the time the Lingaraja temple was constructed, the Jagannath cult had become predominant  throughout Orissa. This is reflected in the fact that the temple deity here, the Svayambhu linga, is not, as in all other cases, strictly a Shiva linga. It is considered to be a ‘hari-hara’ linga, that is, half Shiva, half Vishnu. This and the variety of deities represented elsewhere on the temple, once again point out the basically syncretic nature of so much of Orissan religion. 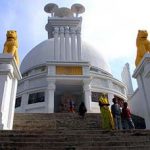 3.DHAULI: Surrounded by paddy fields, the Dhauli hill brings back memories of the historic ‘Kalinga war’ which was fought around here. It is here that Ashoka, the terrible, was transformed into Ashoka, the compassionate and championed the cause of Buddhism. On the foot of the hill one can see the Rock Edicts of Ashoka and the forepart of a skillfully sculpted elephant hewn out of a huge rock. Dhauli has gained prominence due to the establishment of a Buddhist Peace Pagoda, popularly known as Shanti Stupa, built in the early seventies by the Japan Buddha Sangha and Kalinga Nippon Buddha Sangha. An old temple of Lord Dhavaleswar, reconstructed in 1972, also stands on the hill-top. 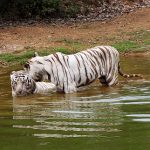 4.NANDANKANAN: a Biological Park where animals are kept in their natural habitat. A centrally located lake divides the Zoo from the Botanical Gardens. Tigers, Lions, Clouded Leopards, Black Panthers, European Brown Bear, Himalayan Black Bear, Gharials, Rosy Pelican, Grey Pelican, Indian Python, King Cobra, etc. are among the attractions of the zoo, which is famous for its White Tigers. The exotic Botanical Garden on the other side of the zoo preserves varieties of indigenous plants. Regular bus services are available to reach the place.