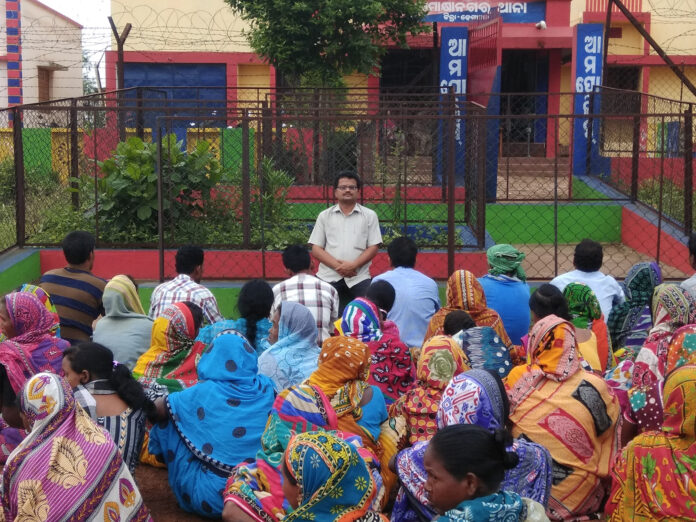 KAMAKHYANAGAR ( 30/8 ) – On 29th August 2017 Tuesday from
5 PM to Midnight 1 AM, more than 500 Workers of Odisha Bhumihina Praja Samiti led by its State President Er Debashisha Hota Gheraoed Kamakhyanagar Police Station against Non Arresting of Henchmen of Minister Prafulla Mallick who attacked Samiti’s Leaders Ranjan Kumar Lenka, Susama Samal & Nilamani Kabi.
The Gherao was Postponed at MID-NIGHT at around 1 AM, after
appointment of Police Security for the Leaders & Assurance of Immediate Arresting of the Goons. 2 PSOs will be present in front of the house of Sri Samal & another 2 in front of Sri Kabi’s House. The Duties will be changed in every 8 hours in a rotation.
Here noteworthy that, on 28th August Charan Mallick of Digodia attacked brutally Sri Lenka in front of Sri Samal’s house. Charan using filthy language shouted that nobody can go against the autocratic ruling of Local BJD MLA & Minister Sri Mallick & BJD District Youth President Sri Jashobanta Parida. Sushama, wife of Sri Samal was also injured since she tried to save Sri Lenka.
After the attack, Sri Lenka & other workers moved to Kamakhyanagar PS & registered 3 FIRs against the Goons. On the Very next day at 3 PM, the Henchmen of the Minister again attacked the house of Sri Samal using stones & damaged 3 Bikes. They threatened to kill all Supporters of Er Hota including him. Then, the Bhumihina Leaders informed it to Er Hota over telephone. Immediately, Er Hota shared this information to Dhenkanal SP Sri Basanta Kumar Panigrahi and requested him for severe action against the perpetrators.
At 5 PM, after knowing about the attack, leaders from different parts of the town gathered at Kamakhyanagar PS & started the Dharana. No Police Officer talked with the agitators till the Mid Night. At around 12.30 AM the SDPO Sri Saikh Abdul Karim & IIC Sri Gyana Ranjan Samal called Er Hota, discussed with him for an hour, appointed PSOs for the Leaders Safety and assured for Immediate Arresting. Then only the Gherao was postponed.
Here noteworthy that, for last 10 months, Samiti orgnaised many mass agitations in Bhubaneswar, Dhenkanal & Kamakhyanagar to Evict Minister Mallick’s close aide & BJD District Youth President Jashobanta Parida from Illegal & Forceful Encroachment of 2.7 Acre Soil Conservation Land. To suppress the voice of the people, Minister Mallick & Sri Parida has planned these attacks against the Leaders.
If Police won’t arrest the attackers immediately as per the assurances given, then more than 5 thousand workers of the Samiti will organize JAIL-BHARO at Kamakhyanagar very shortly and State Governmant will be held responsible if any type of law & Order situation arises during this time, Er. Hota threatened on this occasion.